Conservation of Biodiversity in the Areas Fished by SIODFA Operators

The term ‘biodiversity’ is one that is used without hesitation in a wide range of professions – biologists through to environmental lawyers and administrators.  It seems that the number of people who are in favour of biodiversity is directly and inversely proportion to those who can define what it means.  There is even an International Convention on Biodiversity!

In the simplest of terms, biological diversity is the variety of life and its processes; and it includes the variety of living organisms, the genetic differences among them, and the communities and ecosystems in which they occur.  But, it is relevant that Noss (1990) notes ““Biodiversity is not simply the number of genes, species, ecosystems, or any other group of things in a defined area…A definition of biodiversity that is altogether simple, comprehensive, and fully operational (i.e. responsive to real- life management and regulatory questions) is unlikely to be found. More useful than a definition, perhaps, would be a characterization of biodiversity that identifies the major components at several levels of organization.”

Less pessimistic attempts to define this term do convey the intent of the general concept.  A search of the web provides: “Biological diversity is the variety and variability among living organisms and the ecological complexes in which they occur.  Diversity can be defined as the number of different items and their relative frequency.  Such items can be organized at levels ranging from complete ecosystems to the molecular basis of heredity. Thus, ‘diversity’ can encompass ecosystems, species, genes, and their relative abundance.

In US Congressional legislation, “biological diversity means the full range of variety and variability within and among living organisms and the ecological complexes in which they occur, and encompasses ecosystem or community diversity, species diversity, and genetic diversity.”

Associationsof species, or biological communities, are a further element of biological diversity. Communities form the biotic parts of ecosystems. The variety of species in an ecosystem is a function of its structural and functional characteristics and the diversity of its ecological processes, and the physical environment.

From single seafloor features to sea basins and gyres, indeed to the marine environment, biological diversity includes variety in the kinds of ecosystems, their patterns, and linkages across oceans, seas, water masses and parts of these components.

Ecologists note that almost any hierarchy of the parts and processes of biological diversity is artificial and usually does not avoid some human context.  But it does provide a focus for this concept that is infinitely varied and dynamic and that must be addressed in light of the full spectrum of human needs and aspirations.

Ecosystem diversity is harder to measure than species or genetic diversity because the “boundaries” of communities – associations of species – and ecosystems are elusive. Nevertheless, as long as a consistent set of criteria is used to define communities and ecosystems, their numbers and distribution should be measureable.

Ecosystem components are the inhabiting species in all their variety and richness. Many different species, gene-pool abundance, and unique populations are what most people think of when they hear the term “biodiversity”. But there is much more to consider.
Ecosystem structure refers to the physical patterns of life forms from the individual physiognomy of a cold-water coral to the bacteria found in seafloor sediments.

Ecosystem functions are hard to see in action and harder to determine, but require attention if definitions of vulnerable marine ecosystems are to be anything other than a shibboleth.

Composition, structure, and function define the biodiversity of an area. Composition has to do with the identity and variety of elements in a collection, and includes species lists and measures of species diversity and genetic diversity. Structure is the physical organization or pattern of a system, from habitat complexity as measured within communities to the pattern of patches and other elements at a landscape scale. Function involves ecological and evolutionary processes, including gene flow, disturbances, and nutrient cycling.”

What does this all this mean to SIODFA or indeed to an RFMO that has the responsibility to’conserve’ the fisheries in a convention area, where conservation includes the concept of rersponsible or rational management?

In some areas, certain species may be rare.  This may be because the area is at the edges of the natural range of the species.  In this case, encountering or not encountering a species that is rare in an area may simply reflect the fluctuating environmental conditions that determine the limits of the distribution of the species.  Species rarity may be because the species has never been abundant and naturally occurs at low levels in the area.  This is a situation to be dealt with carefully.  Or, it may be that a species may have become rare due to anthropogenic affects – fishing, pollution or some other form of habitat change.  Again, this is a situation for concern.

The objective of fishing by SIODFA vessels is to remove fish from the ocean.  Thus, like almost all forms of human endeavour, their activity modifies the environment.  Indeed the nearly 100 million tonnes of fish that are taken from the seas each year must be one of the world’s greatest environmental impacts.  What does this harvesting do?

An ecologist wishing to answer this question might insist that first one should define the ecosystem that is being affected – ‘impacted’ in current jargon.  First, is there evidence that fishes such as orange roughy or alfonsino have a functional relation with the benthos of, e.g. seamounts?  Orange roughy may be found in areas of abundant benthos and equally they may be found in areas of bare basaltic seabed.  While nothing can be ruled out, no one has yet posited that orange roughy (or alfonsino, etc.), while physically present in the same environment, are an integral part of the functioning of benthic ecosystems.

Indeed, in terms of deep-sea fisheries, the target fish occur in association with some seamounts, some knolls, some areas of seafloor ridges, etc.  But there is no indication that there is an obligatory association of the targeted species with any .  benthic fauna.  Rather, these seafloor features apparently provide requirements useful to the biological needs of the targeted fish just as they provide attributes that are favourable to the biological requirements of coldwater corals that grow on them.  Both groups of animals appear to be able to live in this habitat independently of each other.  If such independence is the case (as it appears to be), this simplifies management as the challenge reduces to managing the fish resources for whatever management objectives are specified while protecting the the associated benthic fauna.  Both objectives must be addressed

In this sense of the meaning of ‘biodiversity’ (deepsea) fishing affects the abundance of target and bycatch species, e.g. alfonsino, orange roughy, armourhead, cardinal fishes and several others.  Usually little bycatch is taken.  In the case of targeted fishes, the appropriate and more-or-less universal manner of managing ‘biodiversity’ is through fisheries management plans.  These usually are expanded to address ‘dependent’ and ‘associated’ species that would be taken as bycatch.

In the cases of discarded fishes, the main species of interest are the deep-sea sharks.  The table below lists the deep-sea sharks we believe exist in the Southern Indian Ocean, however, their taxonomy is in urgent need of revision.  FAO have published an “Identificaiton Guide to the Deep-Sea Cartilaginous Fishes of the Indian Ocean” and copies of this document are on all vessels of the Associations Members.

SIODFA operators have been running catch recording and documentation programmes of the deep-sea sharks for several years .  These concerns have profited immensely from the at-sea work (two tripos) of a young shark enthusiast, Paul Clerkin, now at the Virginia Institute of Marine Science in the US.  He has collected and identified over 4000 specimens from the Southern Indian Ocean while embarked on the F.T. Will Watch.  This work included the identification at al least one new species of chimaeridae.

The other component of the catch that is more commonly taken to represent ’biodiveristy’ are the benthic fauna species.  Of particular importance are the cold water corals: because of their slow growth and erect form, such corals, on contact with the foot rope of a trawl may take extended periods to recover, if they ever do.  Sponges may be another faunal group of concern because of the vulnerability to trawl gear and the emerging evidence of their importance in water filtration.

In some areas the bycatch of such corals has been a problem and SIODFA is committed to minimizing the probability of such events even if their occurrence is occasional or rare.  Fortunately, in the Southern Indian Ocean for a number of reasons, this form of bycatch is rare, though it may happen.  Much of the fishing effort of the SIODFA fleet is by mid-water trawling and fleet’s experience is that during this type of fishing there is essentially never bycatch of sedentary benthos.  When the fleet is targeting orange roughy during the winter spawn fishery the fishing method involves putting the trawl foot rope,  but not the trawl doors, on the seafloor.  This contact by the 20 m foot rope occurs from two to twenty minutes.  It is during this time that benthos may be encountered and some retained by the trawl.

An analysis of coral bycatch in 2007 by the four deepwater SIODFA trawlers showed that average coral bycatch was 111.1 grams for each bottom tow and 28.2 grams a tow when averaged over both bottom and mid-water, for vessels fishing in the study area for the data set that was examined.  These results were based on the bycatch records of 678 bottom tows and 2002 mid-water trawls.  No distinction was between coral rubble and living coral in the trawl bycatch.  Coral bycatch was recorded from up to 10.7% of the estimated number of sea floor features that were fished.  Depending on the vessel, period of the data record, and the seafloor feature, the percentage of tows with coral bycatch ranged from <0.01% to 2.27%.  Based on the fishing period for which coral bycatch data were available (a total of 706 days), the estimated annual bycatch of cold-water corals per vessel is 39.0 kg/vessel.

However, large episodic catches of coral do occur.  The associated figure shows a 70 kg catch of what was deemed to be ‘evidence of a vulnerable marine ecosystem’ by one SIODFA vessel that required the skipper to move 5 nm from the position where he hauled his gear.  XXXX Whether coral rubble such as this, often dead for hundreds/thousands of years constitutes a vulnerable marine ecosystem is, for some, highly contentious.  Much other bycatch of coral is less impressive.  The figures below show other examples of ‘coral’ bycatch that occur from time-to-time. YYYYY Some finds are surprising: the following photo shows cold water coral colonizing a piece of trawl warp that had been discarded.  This raises the issue as to how quickly deepwater corals can colonize new habitat abe nd indeed many more perplexing questions, such as when would recovery of significant adverse damage be declared to have happened. 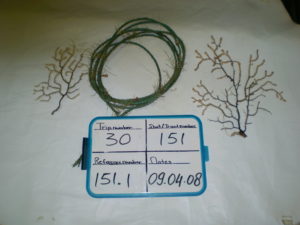